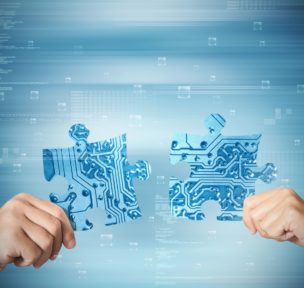 We’ve already talked about digital transformation and the way it’s changing the world of business. Along those lines, we discussed the effects that augmented reality, the IoT and cloud have on companies and their output.  We also discussed how edge computing and the agile development play their part.

In this article, we’re going to get deeper into the aspects of contemporary digital transformation. You can find out more about the following elements:

Until recently, financial authorities were controlling the global financial system, including local currencies. These authorities encompass a range of international institutions to national central banks. However, the rise of blockchain technology is changing the way money is spent and controlled.

In a nutshell, computers, not people, handle transactions and store information about financial operations within this monetary technology.

To make things more understandable, it’s important to break down ‘blockchain’ into the ‘block’ and ‘chain’. The chain is an online database that keeps the pieces of digital information known as the block. Each and every block stored on a blockchain consists of three basic elements: the data about certain transactions, the information about the parties involved in transactions, and the special code called the ‘hash’ that makes every block unique.

The data about transactions contains the time, date and the amount of money involved in each transaction.

Finally, the hash basically locks the block. It’s a special combination of numbers that record each and every transaction made in the blockchain realm.

We’re entering a new monetary age due to the fact that money transfers and other transactions get handled and verified by computers that aren’t controlled by financial institutions. It’s more flexible and less centralized but it’s only in its infancy so we’re yet to see all the positive and negative effects it will have on our monetary habits.

We’re at the dawn of a new age in the development of industrial work.

Computers that can communicate with one another and make decisions autonomously are becoming the dominate force in what is known as Industry 4.0, or the fourth industrial revolution.

This is something that’s already happening as we speak (think autonomous cars or the Internet of Things). And just like in every revolution, those who react promptly are more likely to use the benefits of the changes.

In other words, both employers and employees need to start learning about the advancements that this improved work organization can bring.

For instance, connecting machines collects an immense amount of information. Utilizing this data can help companies improve performance, productivity and optimize maintenance. What’s more, business owners and managers can use this data for predictive analytics. That way, they can customize offers for their target audiences and save assets that would be otherwise spent on marketing.

Furthermore, the Internet of Things will play a tremendous role in the fourth industrial revolution. People will have access to large amounts of useful business data being stored in the cloud and utilized by remote computers. In turn, this can help businesses worldwide to maximize tech innovations to improve their operations and become the front runners of economic progress.

Connected machines that can collect data and use it independently is only the beginning of these cutting-edge technological innovations. Mutually connected quantum computers are capable of learning and working on their own. Making for a reality that will further change the face of the world as we know it.

Unlike classical, binary computers that are based on two different conditions (either 1 or 0), quantum computers work on the basis of quantum bits. Also known as qubits, these states are different from ordinary, binary options due to the larger number of possible states.

As a result, such computers can process mathematical problems and algorithms much faster, hence performing much more operations per unit of time.

When machines such as these are connected and capable of learning, we can only imagine the scope of their impact.

Although much of this progress is in the embryonic stage, large tech players, such as Google or IBM, are already developing their own quantum computers. Soon we can expect that quantum computers will be available to a wider mass of people. This will be a true quantum leap in machine learning and connectivity that will have a tremendous effect on the entire business world. We’re here to help you deal with these innovative computing techniques and understand their impact on the business organization.

The traditional work culture advocated establishing separate teams that would work together only occasionally. However, the work strategy based on DevOps encourages a direct, seamless collaboration between developers and teams responsible for operations. That way, all the professionals working on the same project can put features to work in no time, as well as identify and fix the problems as fast as it gets.

By sharing information between team members and departments immediately, DevOps enables prompt reactions to issues in the development process and makes room for automation.

Based on the agile software development, DevOps encourages people working on the same development task to share information throughout the process. That way, they can work together, so that each and every cog in the development machinery can make changes at the same moment when they have to be made.

This integration of human and computing resources increases work efficiency while saving assets and time at the same time.

We’re living in exciting times when it comes to technological innovations. If things were happening fast in the last few years, we can expect even more rapid progress in many fields of technology. From the innovative way in which money is used in blockchain technology to quantum computers and innovative DevOps software development, companies must work hard to prepare for these revolutionary changes.

The fourth industrial revolution is happening before our eyes so let’s take part in it and embrace the future of incredible possibilities.

TuiSpace is here to help you understand and implement these innovations, with the goal to improve your business organization and prepare for future challenges.

Your Brightest Way Ahead