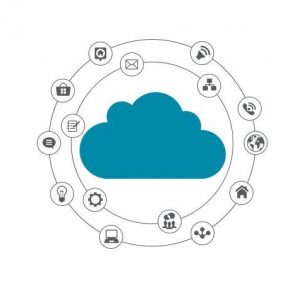 You probably hear about cloud-based technology or already use it on a daily basis. Amazon AWS, DropBox, Google Apps, Gmail, Microsoft Azure, Microsoft OneDrive, Citrix Xen, Vmware, are all products that are related to cloud technology and these are just scratching the surface. The concept of cloud technology was actually around for a long time: it is a fancy term given to clustering (pairing) servers or storage together to provide more resources (processing or data storage) on a larger scale. At the heart of cloud technology is virtualization. Thanks to virtualization, we are able to take a given computer and fully take control of it and deploy what we call “virtual machines.” Imagine taking a computer (we use the term computer here but it can be a PC, laptop, server, etc. – any device that can compute) and taking full control of it and “slicing it” or creating virtual machines as you choose (In short, the process involves installing a kernel called a hypervisor such as Xen, HyperV, ESXI, proxmox, etc.). These virtual machines could then run different operating systems such as Windows and Linux-based ones.

Why use virtualization and cloud technology in the first place? There are many reasons but the main ones are cost savings and flexibility. Here is a good example: Imagine Company A has three servers. One server is used for email purposes and its resource utilization averages at around 50%. Server Two runs Active Directory services and is utilized at 90%. Server Three is utilized as a data store and is utilized at 30%. This means that there are a lot of idle resources that are not utilized and thus money is considered “wasted.” What if we could combine all three servers and allocate resources more efficiently? That is where virtualization comes to play. We could install a hypervisor on each of those servers and have one “giant virtual computer.” This means that we would have a pool of resources from all three servers and we could run virtual machines to fill the roles of those servers. Got the basics down? Good. Now imagine this concept on a larger scale with thousands of servers paired together to form a large “cloud” or pool of resources. Let’s look at some other popular terms you may run across.

The basic concept of cloud computing is to provide I.T. resources such as servers and data access methods remotely to users in an on-demand arrangement. The huge advantage of cloud computing is that it relieves the client from having to invest large sums of money in hardware and software in-house, and very often that results in a payroll savings as well, since fewer I.T. personnel are needed to manage the in-house resources.

One good example of cloud computing is offered by Amazon Web Services, which provides all the computing power, web content, database access, and storage a business needs to help it be competitive in today’s world, and hopefully to experience steady growth. All these infrastructure services are packaged as a utility which the client pays for as needed.

Some companies feature cloud storage as their main offering, and even this can be very advantageous to users, since it avoids the need for storing vast quantities of data on local devices, and frees them up to store other data. DropBox is one such company providing a service that synchronizes stored data to all devices owned by a single client, once that data has been saved.

When information is saved to the cloud infrastructure at DropBox or a similar provider, it can then be accessed securely from anywhere, using any kind of device. This is extremely useful for business clients, because it facilitates collaboration among team members, who can all access the same information quickly and easily, thus avoiding redundancy of effort and promoting faster progress.

Businesses are all about productivity, because employee productivity leads directly to success against the competition, and growth for the company. Anything that can facilitate greater productivity is therefore an almost priceless commodity in the business world, and a much sought after solution.

Microsoft’s Office 365 offers such a solution to clients, providing a web-based suite of services such as spreadsheets, word documents, power point applications, and document publishing under a single umbrella. All these are typical functions in the business world, which practically everyone in a given company would normally make use of.

Even if you are a designer and working heavily with Adobe Software the new line of Adobe Creative Suite is already sold as software as service on a cloud based platform, Adobe Creative Cloud comes with a lot of neat features that allow you to share and collaborate with your creative team.

The great thing about having these functions made available on the cloud is that any work such as a spreadsheet can be saved, and then accessed by any other person in the company with access privileges. This can be a tremendous time-saver if several people are working on the same project and using some of the same documents, since anyone who accesses the document is seeing it in its real-time state.

Even more basic office applications like hosted email service and a hosted company calendar can provide the same kind of value to a business. Email storage is notorious for its runaway growth, and having it hosted on the cloud offers relief from constantly allocating greater storage for company emails.

Amazon is one of the biggest players in cloud-based offerings and they offer a pay-per-use cloud computing service model where clients are charged only for their use. The main difference in the instances setup by Amazon are in the number of CPU cores, the memory allotted, I/O performance levels, and overall disk space requirements. A single CPU setup for instance will cost far less than a quad-CPU configuration, and the same is true for each of the other categories of required infrastructure. Based on the total setup of all those factors, a business could literally build an entire data center without having any of the infrastructure physically in-house.

Related to this concept is Amazon’s Rapid Scale strategy, which allows a company the needed flexibility to quickly ramp up its business to meet the demands of growth. In many cases, the business itself is poised to grow much faster than its I.T. infrastructure can support, especially if it’s all contained in-house. With all those infrastructure issues handled by a hosting organization such as Amazon, which can accommodate that kind of rapid growth, infrastructure is simply scaled up to be in sync with the actual pace of the business itself.

Content Delivery Network (CDN) technology has been around for a few years as well and in short it allows a company to utilize a large company’s cloud network (such as Amazon or SoftLayer) to deliver media content to its users based on their geographic locations. This means that your end-users could stream videos and pictures a lot faster depending on how close the nearest CDN server is located.

Businesses are increasingly off-loading part or all of their IT services to the cloud. There is so much that can be said about cloud technology and the number of companies that are competing in this space is increasing at a very fast pace. As of this writing, the current “hot technologies” as they related to cloud tech is SDN (software defined networks), vGPUs (virtual graphical processing units), and VDIs (virtual desktop infrastructure).

Now that you’ve skimmed the surface of cloud technology, you may be asking yourself how to even start leveraging your business to the cloud? That’s where your friendly hosting specialists from TuiSpace come into play. TuiSpace can provide exactly the kind of scalability discussed above, to assist your company in its rapid growth phase. Your IT infrastructure can be basically hosted off-site, or your in-house hardware and software can be mirrored to provide redundancy and additional resources. This is a tremendous business advantage especially for disaster recovery and business continuity purposes.

Businesses and personal bloggers can also take advantage of another TuiSpace service: WordPress managed hosting powered by Amazon Web Services. This allows web site owners to manage their web content easily and it relieves the need for having in-depth knowledge of WordPress administration and development. WordPress content can also easily be pushed to CDN networks to push content to your end-users at blazing speeds. By choosing TuiSpace as your managed hosting company, you’ll have your business infrastructure maintained in the same kind of environment as NetFlix and many other highly successful modern businesses.

Your Brightest Way Ahead